Currently accepting participants to test the product and provide feedback!
Complete the Test to Claim Your Prize

Dementia is a major cause of disability and dependency among older adults worldwide, affecting memory, cognitive abilities, and behavior, ultimately interfering with one’s ability to perform daily activities. There is a tremendous strain on the Individuals, Families and the System, with late or missed dementia detection. Unpaid caregivers take on the majority of the time and expense at the detriment of their health.

The number of hospitalizations due to dementia that are preventable

Barriers in the System

Educating the public is also a needed component of preventing abuse, neglect, and exploitation  of people living with dementia.

Current data collection methods are mixed, inaccurate and vary across Canada and the USA.

“There is a growing body of evidence that healthy living is key to preventing dementia. Whether as a caregiver to a family member or friend, as a person living with dementia or in interactions at work or community involvement, many of us will encounter dementia at some point in our daily lives”

HealthTech for seniors, specializing in people living with dementia who could benefit from additional assistance with social, mental and physical stimulation. The secured video platform allows for real-time facial recognition, easy click-on-the-pic calling, and approved caregiver controls to enter video without acceptance from the senior. Take advantage of the platform by allowing touch-screen games to be played between callers to increase socialization and cognitive exercise while connecting from anywhere in the world.

Caregivers require assistance and information to ensure the needs of their loved ones are met.

While connecting socially or on their own, individuals will have on-screen cognitive games and exercises to stimulate brain health.

Customize exercise classes, physiotherapy and program delivery for each individual based on their level of ability and physical condition.

Capturing each individual’s performance across the social, cognitive and physical environments to provide the learning to detect symptoms and recommend a professional diagnosis.

Our organization is modeled after her core values and iconic brand. From the signature flower she sported as a young lady to her infectious love for her family, friends and community. Adeline was hardworking and progressive in an era that was not always welcoming to women. The class and grace demonstrated through her 89 years on this earth have inspired our core values 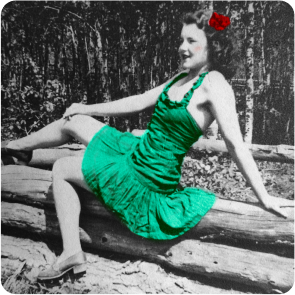 10% of all Adeline subscriptions go to enhancing early detection and diagnosis services to underserved communities.

This product is available for anyone who would like to participate and make a difference!

People living with dementia can benefit from our focus on ease of use, so that they may communicate with facial recognition video of their loved ones

Researchers can use our video data, facial recognition, and machine learning algorithms to participate in co-developing detection and diagnosis capabilities

Healthcare providers can provide virtual health services, prescriptions, and other therapies through the platform